As the birthplace or adopted home of many African American artists, activists, and achievers whose contributions have shaped and strengthened the nation, Virginia is a veritable treasure trove of Black history.

From Lynchburg-born astronaut Leland Melvin, to pioneering civil rights attorney and son of Richmond Oliver Hill, to Olympic gold medalist and Virginia Beach’s own Gabby Douglas, to Grammy-winning producers/rappers/Hampton Roads natives Missy Elliott and Pharrell Williams, the state is well-known for its plethora of homegrown changemakers. 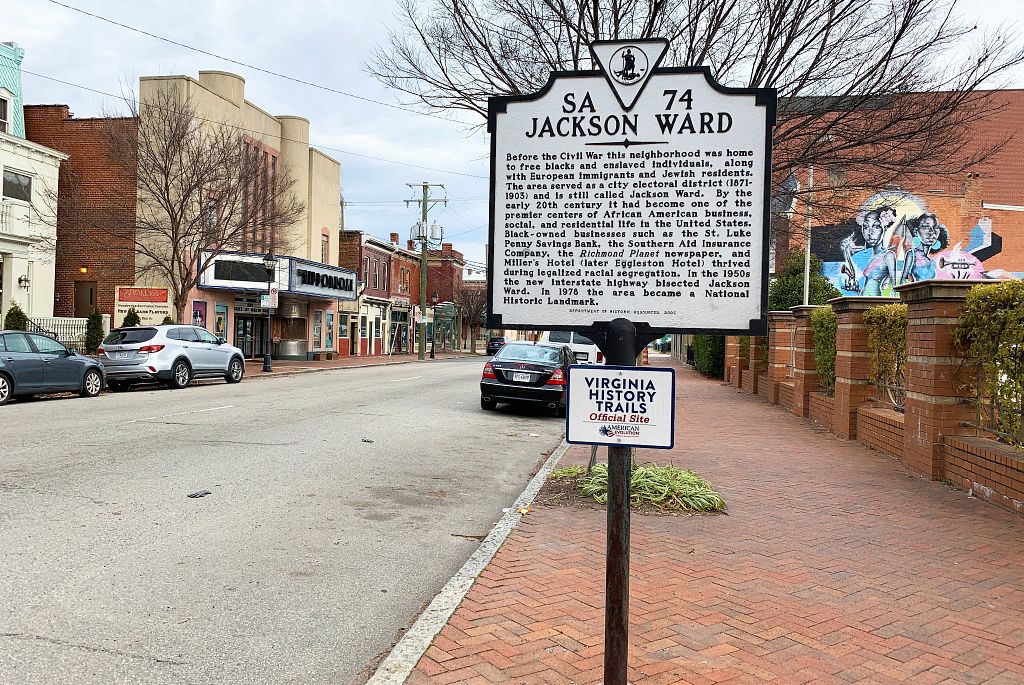 But did you know that Jackson Ward, the historically Black community in the Commonwealth’s capital city, served as an early incubator of Black brilliance and excellence, whose impact can still be seen and felt in the city today? Here, we review the historic singularities and contemporary significance of aspects of Jakcson Ward’s legacy.

By now, many people have heard Jackson Ward described as “Black Wall Street,” and the “cradle of Black capitalism; these monikers point to the community’s reputation as a hotbed of Black business in the late 19th century through the first half of the following century. Jackson Ward was home to more than 100 businesses owned by African Americans, according to the National Park Service’s podcast tour of the historic district in Richmond. “Between the years of 1889 and 1929, there were six chartered African American owned banks in Richmond and each had a presence in Jackson Ward,” the historian Elvatrice Belsches shared in the tour, including the first Black bank to be chartered in America, the Savings Bank of the Grand Fountain United Order of True Reformers.

Businesses including pharmacies, insurance companies, law offices, and funeral homes flourished in Jackson Ward, and fomented generations of successful Black entrepreneurs. George O. Brown was the very picture of one such enterprising person: Brown was born enslaved but by 1899, had become a trained photographer and opened a photography studio in Jackson Ward, a family-run operation that provided African American Richmonders “portraits that please” until the 1960s. Businesses like Brown’s also bolstered the economic development of the area, and contributed to a rising Black middle class who bought homes, a key metric of personal and family wealth building. 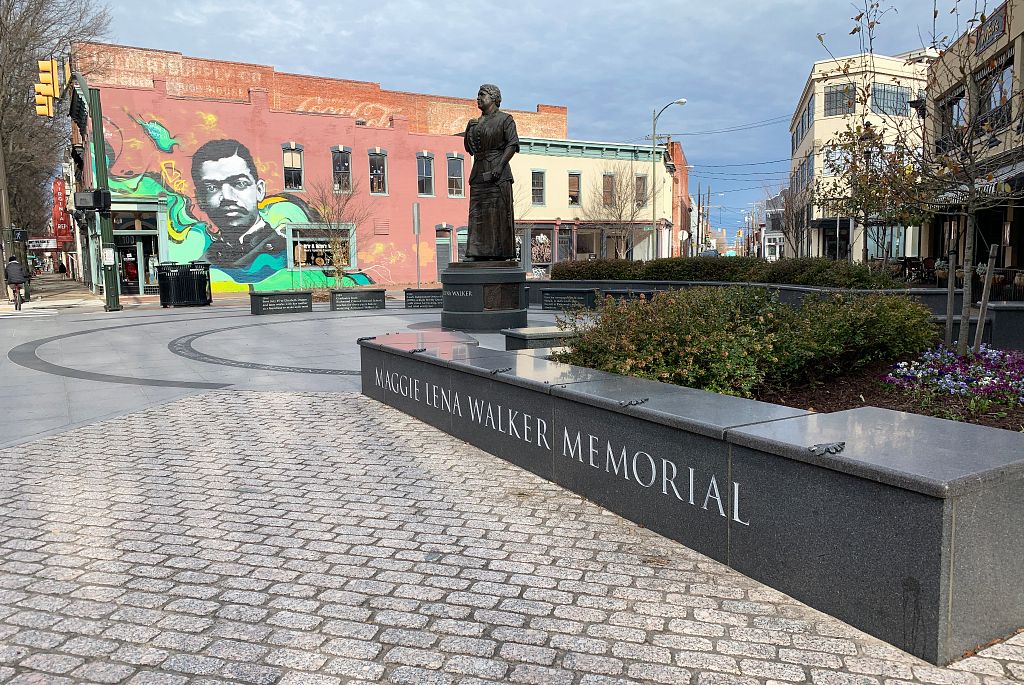 Today, the Jackson Ward Collective is the continuation of this legacy. A membership-based Black business incubator and resources hub, the Jackson Ward Collective was co-founded in 2020 by Black business owners Rasheeda Creighton, Kelli Lemon, and Melody Short.  The group’s goal is to “learn, grow and own in the Black community; resources and events are available on their website: jacksonwardcollective.com.

Widely-circulated photos of the stately homes on historic Jackson Ward’s “Quality Row” are visual evidence of the economic prosperity and social mobility of the community’s Black elite in the early 20th century; serial entrepreneur and the first known woman bank president Maggie Walker, for example, resided on the Row. Quality Row –the forerunner of East Leigh Street – was but one feature of the Ward’s striking historic architectural history. Not only was Jackson Ward home to the second-largest collection of decorative wrought iron detailing outside New Orleans, but it was also the training ground of architects whose work transformed the built environment of Black Richmond. 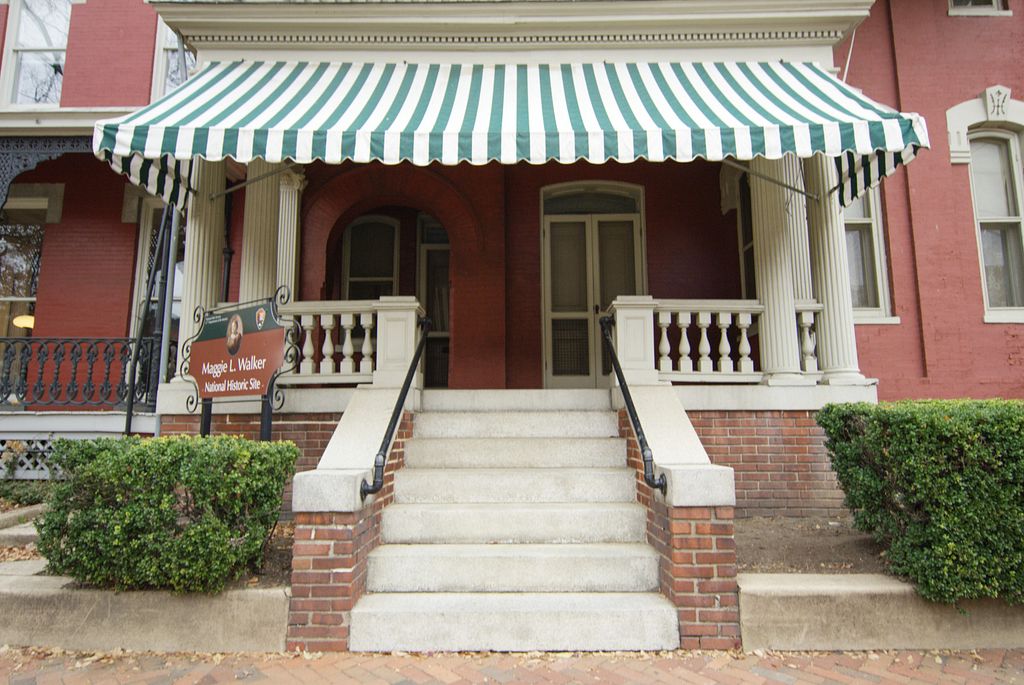 One such architect, Charles Russell was born in Jackson Ward in 1875 and learned carpentry at Hampton Institute (now Hampton University), graduating in 1899. While teaching carpentry at Booker T. Washington’s Tuskegee Institute, Russell completed an architectural apprenticeship during the school’s campus construction, then the “largest African American building project in the country,” writes Selden Richardson, author of “Built by Blacks: African American Architecture and Neighborhoods in Richmond” (2008). Russell soon returned home to Jackson Ward, serving as Richmond’s first resident Black architect, one of the first licensed Black architects in the state of Virginia, and as an instructor at Virginia Union University. Russell’s designs morphed Jackson Ward from a mainly residential neighborhood into a booming business sector of Black Richmond. His first commission was Maggie Walker’s famed three-story St. Luke’s Penny Savings Bank building, constructed at First and Marshall Streets in 1910, according to Richardson. Russell’s trademark designs were multipurpose buildings that showed his “innovation and flexibility in design,” often including a ground-floor business, living quarters above, and a flex space that could be used as an auditorium or banquet hall. This design style, conceived by Russell and his colleagues in Jackson Ward, was “copied extensively around the country,” writes Richardson. 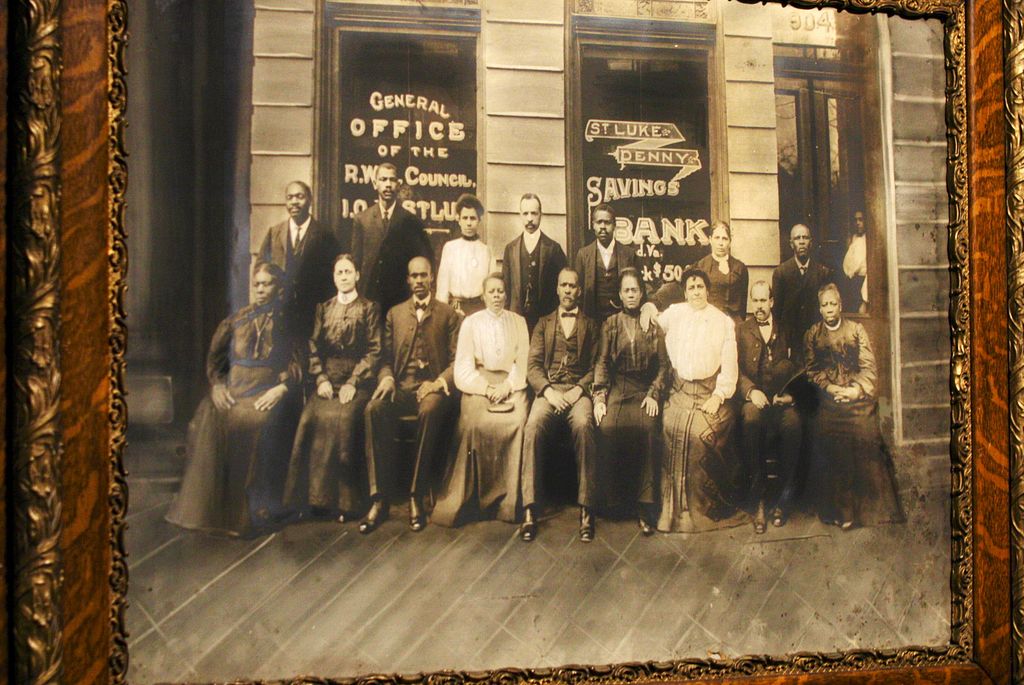 Many of the dozens of buildings Russell designed have been lost to time and neglect. However, a mansion he designed, located at 508 St. James Street in Jackson Ward, still stands. Russell designed and built the palatial, colonial revival style home as the principal residence of Dr. William C. Hughes and his family in 1915. After Hughes’ death in 1952, the house passed from family ownership; for the next fifteen years, it housed the only school for blind Black people in Virginia, but by 2013, the property landed on the city’s imminent danger list, at risk of demolition due to its extreme disrepair. Historic Richmond intervened to save the home and recommended it for purchase to historic preservationist Zarina Fazaldin. Fazaldin, who has restored more than two dozen homes in historically Black Richmond communities, recently completed a total overhaul of the home, managing to preserve much of its character and some of its original elements – like the gleaming oak wood floors found throughout the first level of the home. The home now contains several apartments, amping up Jackson Ward’s stock of affordable housing. To learn more about Jackson Ward’s built environment and immerse yourself in its rich history, consider booking a “Walking the Ward” tour, hosted by Jackson Ward native and radio personality Gary Flowers. 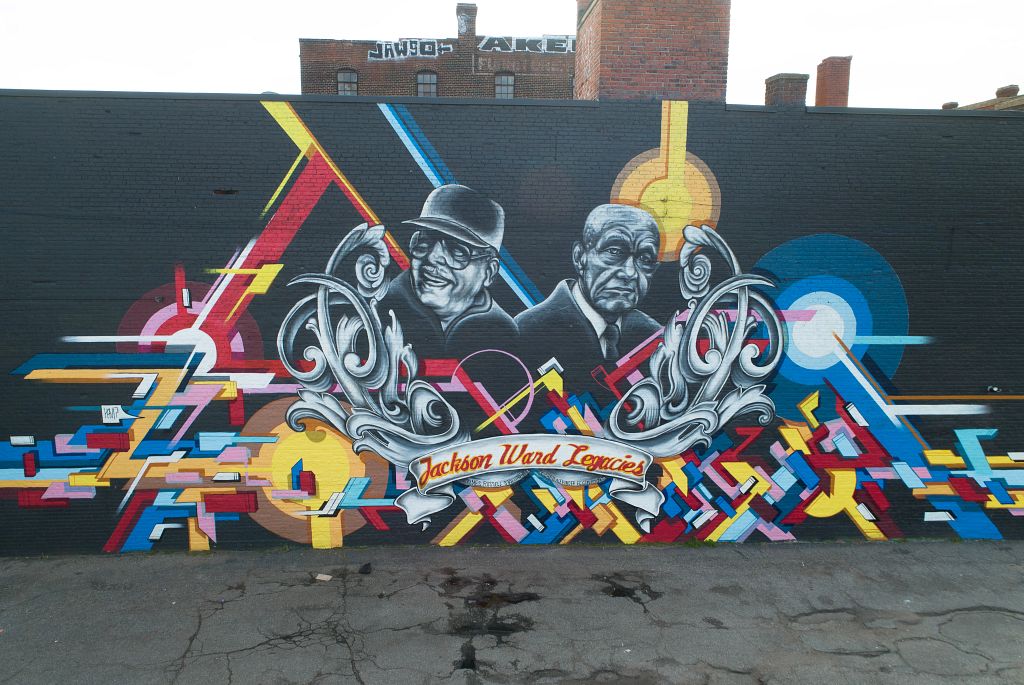 No survey of Jackson Ward’s history is complete without mention of its shimmering days as the “Harlem of the South,” when it was considered an East Coast nexus of entertainment and recreation by Black Americans, pulsing with Black creativity, culture, and cool in the middle of segregation-era Virginia. These were the glory days of The Hippodrome, when the art deco-style performing arts theatre on Second Street hosted the likes of Cab Calloway, Ella Fitzgerald, James Brown, and Redd Foxx. A succession of Black-owned hotels, restaurants, and cafes bloomed in Jackson Ward during these years; central among them was the Eggleston Hotel, which sheltered celebrities like jazz composer and Harlem Renaissance darling Duke Ellington when his orchestra’s tour came to Virginia. Neverette Eggleston, Sr., a former country club chef and restaurant manager, had in 1942 transformed the Miller Hotel into an elegant establishment bearing his name, exclusively serving Black lodgers. Slaughter’s Hotel and Cafe, on the same block, was a favorite meeting place of the community’s many civic groups including Maggie Walker’s Independent Order of St. Luke. 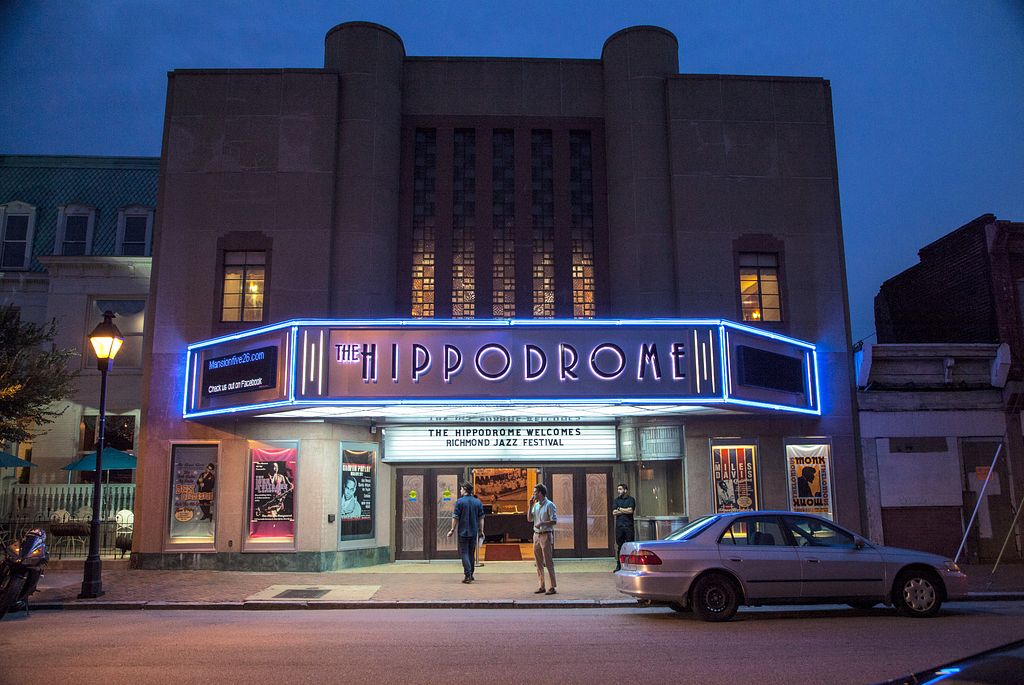 There is no shortage of entertainment and dining options in modern-day Jackson Ward. The Hippodrome is a multifunctional entertainment venue, replete with a herringbone-pattern dance floor in its historic theatre and both private and public dining spaces; visit hippodromerichmond.com to take a tour or book a special event. 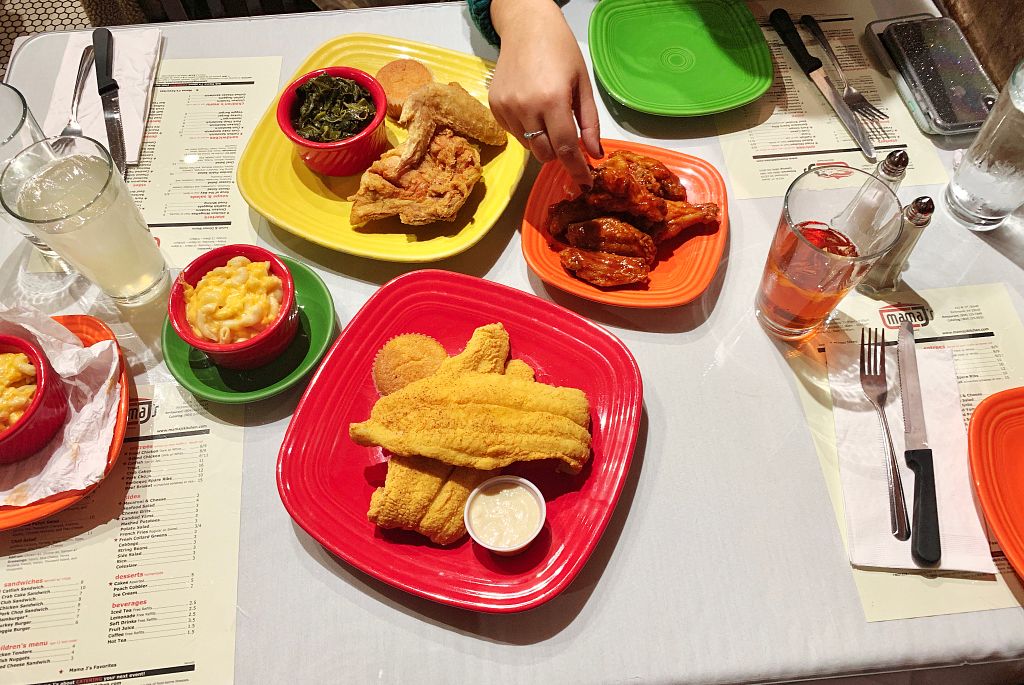 Those craving the comfort of soul food may head to Mama J’s or Big Herm’s Kitchen for can’t-miss deliciousness, especially flavorful fried fish. Chow on cheesesteaks at Str8 Out of Philly, a new kid on the Jackson Ward restaurant block, or get ready to slurp at Cheddar Jackson’s, offering a series of soups plus craft sandwiches. Urban Hang Suite, dubbed a “social cafe” by owner Kelli Lemon, is one of the latest Black-owned restaurants to make its home in Jackson Ward; find a full list here, compiled by the Richmond Black Restaurant Experience. 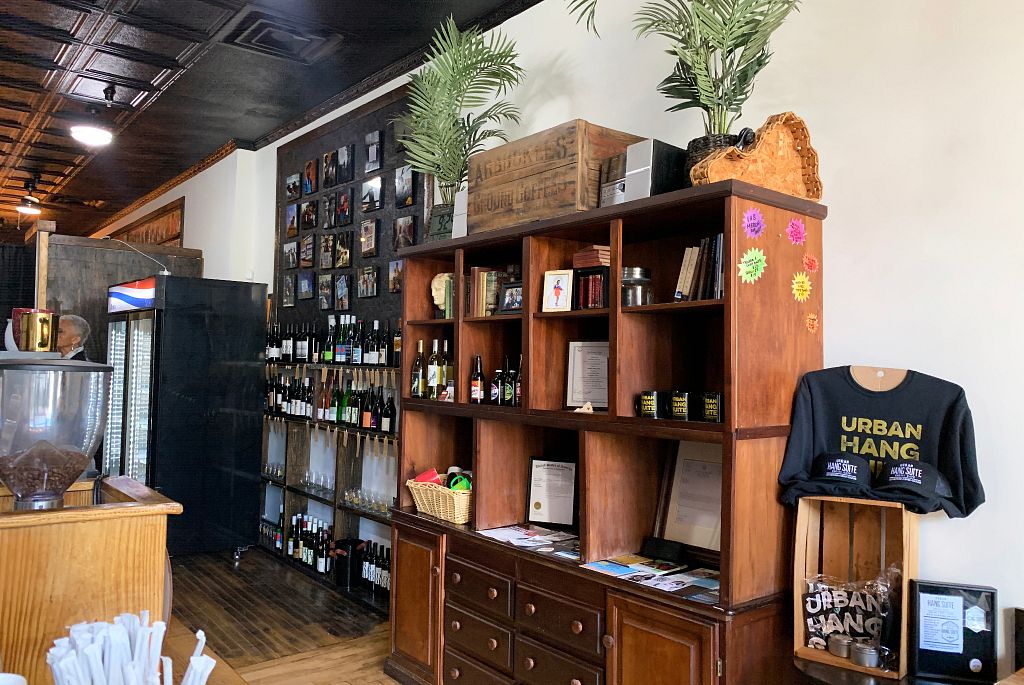 Trailblazers like Maggie Walker and newspaper editor John Mitchell, Jr. dominate popular knowledge about the Black leaders who emanated from Jackson Ward. While their accomplishments merit continued celebration, we should also include other individuals alongside them, people who are now lesser-known, but whose contributions changed the course of American history.

Jackson Ward: To Be Continued

In April 2021, a host of organizations commemorated Jackson Ward’s 150th anniversary; a pair of Richmond sisters, Enjoli Moon and Dr. Sesha Joi Moon, headed up the effort through The JXN Project, an immersive multimodal experience designed to “excavate, elevate, and educate on the hidden histories of Jackson Ward” to contextualize “the nation’s first historically registered Black urban neighborhood.” Using oral and written narratives, art, and live events, the year-long project shed new light on Jackson Ward’s past and breathed new life into its future. The project’s Summer Lecture Series (registration required), hosted in partnership with the Richmond Public Library and the Library of Virginia, offers opportunities to learn more about Jackson Ward’s lesser-known history and better understand the vibrant community that it is today.

Want to know more about Virginia’s lesser-known history? Dig into these articles and stay tuned for more But Did You Know… history pieces to learn about some of Virginia’s most incredible true but untold stories!

Samantha Willis is an award-winning independent journalist and writer with a decade of print, broadcast, and digital media experience. She is also the co-creator of The Unmasking Series, an anti-racism dialogue and workshop program which has convened four times throughout the state of Virginia since its founding:  #UnmaskingRVA (Richmond, 2016-17),  #UnmaskingCville (Charlottesville, 2018),  #UnmaskingHR (Hampton Roads, 2019),  #UnmaskingPeninsula (Hampton University/The Peninsula, 2021). She is a native of Hanover County, Virginia and lives in Ashland with her husband Jamaal and three sons.

9 Gorgeous Glamping Destinations in Virginia for a Luxury Outdoor Experience

Hiking with Kids: 10 Trails for Beginners in Virginia

WanderLove: A Southwest Virginia Road Trip from Roanoke to Abingdon

Winter at the Wineries: Cozy Vineyards With Heated Outdoor Seating