Since 1989, Ellwood Thompson’s has served the Richmond community as a locally owned grocery store, bringing organic produce and products from local farmers, artisans, and businesses, but in the past decade, they have expanded their in-house kitchen, offering a wide array of vegan and vegetarian prepared foods. Vegan chicken nuggets, tempeh mock chicken salad, and veggie wraps are just a few of the vegetarian and vegan friendly dishes at this community staple.

One of Northern Virginia’s most popular vegetarian spots, Sunflower Vegetarian Restaurant serves inventive Asian-inspired fare, creating mock-meat dishes that are incredibly delicious. Start with the Teriyaki Mock Sesame Eel or the Fried “Chicken”, then order one of their meatless entrees, like the Veg Shrimp in your choice of General Tso’s, Lemon, or Sweet & Sour Sauce, or the Adventure of Tempeh Land – a marinated baked tempeh sautéed with red pepper, snow peas, asparagus, baby corn, and white mushrooms in a Thai curry sauce. Finish off the meal with one of their vegan desserts, such as the Tiramisu (both vegan and gluten-free!) or the Avocado and Lemon Pie. 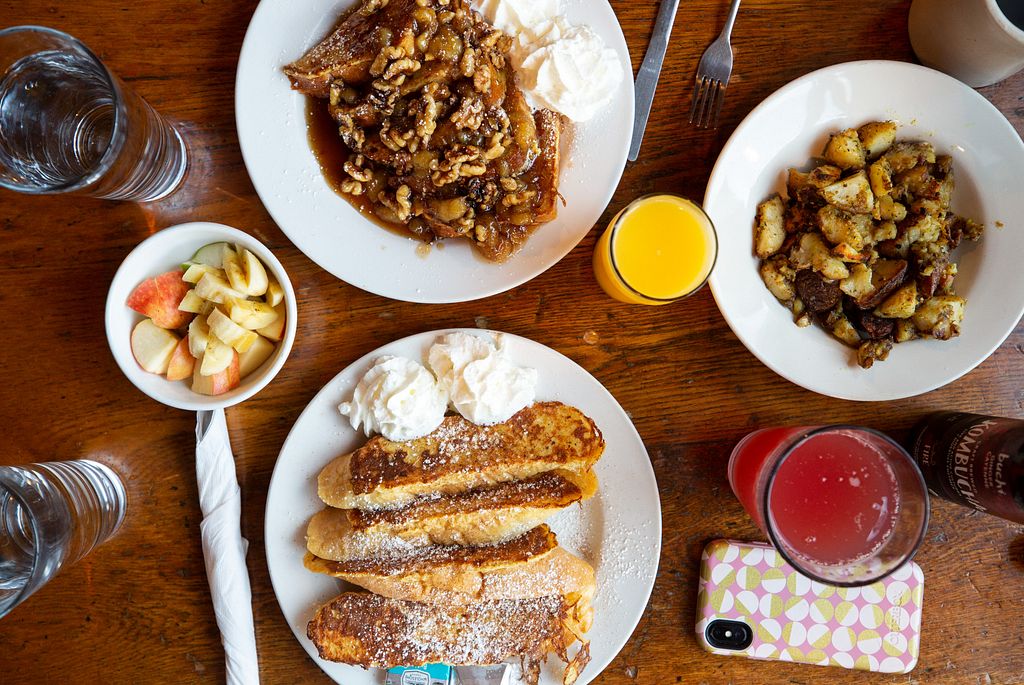 Gillie’s has been a favorite dining spot for Blacksburg residents and Virginia Tech students alike since 1975. The restaurant blends your classic down home cooking with progressive vegan and vegetarian fare, using the freshest ingredients to craft healthy, casual cuisine. They are open for breakfast, lunch, and dinner, with each menu having several vegan, vegetarian, and even gluten-free options clearly marked. Vegan lunch options include the Hummus Salad, Tempeh BLT (vegan), and Gillie’s Burger, made with a black bean patty. For vegetarians, there’s the Tofu Reuben, Mushroom Burger, and the Peanut Tofu Wrap.

While Brown Chicken Brown Cow is primarily a burger place, you can substitute a falafel patty for the beef, allowing all of the burgers to be vegetarian. We like the Nostradamus – topped with caramelized onions, Gruyere cheese, Creole mustard, and arugula, or the Aristocrats – heaped high with caramelized onions, goat cheese, cabernet-blueberry glaze, and arugula, but you can also build your own burger. Another vegetarian option is the Chick-A-Pea sandwich – a falafel sandwich with Tzatziki, spinach, and tomato. NuVegan Café transforms all your favorite comfort foods into tasty vegan alternatives that pack plenty of flavor into their meatless dishes. Served cafeteria-style, their 100% vegan menu includes vegan macaroni and cheese, warm gooey cinnamon rolls, fried “chicken” drumsticks, and even crab cakes. The restaurant strives to change the perception behind vegan food, proving that it can be healthy and sustainable without sacrificing flavor. If you’re looking for vegetarian and vegan friendly options in Virginia’s Blue Ridge, consider dining at Taaza, an Indian restaurant in Roanoke. They offer about a dozen different options for the vegetarian and vegans, like the cocktail samosas appetizer, filled with spiced potatoes, green peas, chickpeas, and a mint and tamarind chutney, or the Channa Pindi, a traditional Indian entrée made of chickpeas, onions, tomatoes, and fresh herbs served over Basmati rice. Their menu even features a separate Vegan and gluten-free section, with creative, flavorful entrees including Tandoori grilled Portabella mushrooms with curried lentils and Roasted Eggplant Bartha.

Fresca on Addison offers a full vegetarian menu, including brick-oven pizzas, sandwiches, soups, salads, and other entrees, but almost everything on the menu can also be made for vegans, as well as the gluten-free folks. For dessert, their vegan cupcakes are a must. The restaurant avoids processed foods and additives, serving only foods that are local, organic, fresh, and healthy. After dining at Fresca, check out their in-house market area, where some of their specialty ingredients are available for purchase.

Loving Hut is an international vegan fast food chain that offers healthy, Asian-inspired meals made with sustainable plant-based ingredients. While the vegan restaurant is considered a chain, each location has a unique menu crafted by the in-house chef. The menu at the Falls Church location has over 50 different dishes, including soy Beef & Broccoli, General Tso’s made with soy protein, and a Vietnamese Vegan Sandwich, as well as more American dishes like the Vegan Hot Dog, Crispy Burger, and Club Sandwich, all meat-free.

Other Vegan/Vegetarian-Friendly Restaurants in Virginia: